Halloween season is upon us, and I thought it might be a good time to share some of our office’s favorite ghostly characters in the books we explore on the St. John’s program. While many of the stories that we read are not “ghost stories” in the modern sense, many things that happen in the stories we explore are super-natural, and sometimes even horrific. The titles below might be worth reading (or re-reading) as we creep ever closer to the spookiest night of the year.

Banquo, Macbeth – This foil of Macbeth, and rightful heir to the throne in the play, is more of a source of anxiety to our neurotic protagonist than any source of horror to the reader, and might even serve as a metaphor for the guilt that Macbeth feels for having killed him. He shows up during a banquet sign during a latter portion of the play, to haunt Macbeth for the murderous act, and he has gone on to inspire the cliche, “ghost at the feast”, which means a subject or person that is to be nervously ignored, as a reminder of an awkward past or future situation. And let’s be honest; there’s nothing scarier than awkward dinner conversation. 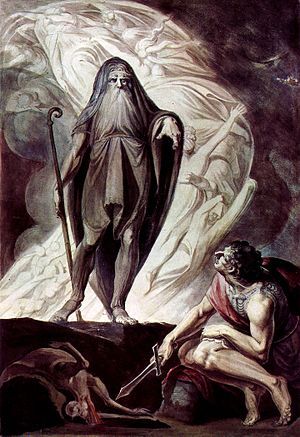 Teiresias, The Odyssey – In Book 11, Odysseus travels to Hades to seek the guidance of Teiresias. In life, Tiresias was a prophet of Apollo in Thebes. In Death, he was sent to the first level of Hades, and Odysseus seeks him out for guidance. There, Tiresias gives Odysseus the necessary advice he needs to get back to Ithaca. Hades served as the underworld to these greek heroes, and Odysseus encounters many ghosts throughout this section of the story, though his conversation with Teiresias may be the most important to the plot. 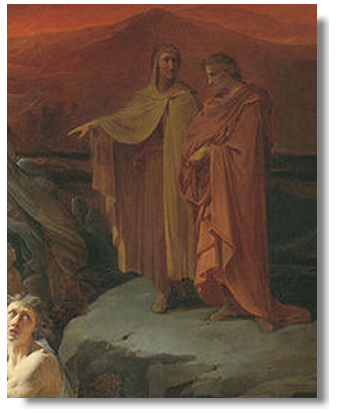 Virgil, Dante’s Inferno – Speaking of the underworld, how could we forget this classic trek through Dante’s conception of Hell? In life, Virgil was a poet famous for writing the Aenied, another epic poem that we read on our program. In death, he became Dante’s guide through The Inferno (which simply might be the most intense haunted house/maze/boat ride in all of literature).

Ghost, Hamlet – Maybe one of the most mysterious ghosts which we explore, is the ghost of what could be Hamlet’s father. As one of the first characters to appear, it has an eerie effect on the play as a whole. There is not really a critical consensus on whether the ghost is just an effect of Hamlet’s imagination within the play, or serves as an actual character who influences the story outside of Hamlet’s mind, which to me, makes him an even scarier kind of character.

The Samurai/Medium, Rashomon – Occasionally, we will explore the films of Kurosawa in the precepts on our Santa Fe campus. This story recounts a murder told through three perspectives, one of them being the ghost murdered victim through a medium. The story focuses on the nature of truth, and how it exists within subjective experience, a technique now imitated through many examples of film and television, aptly called the “Rashomon Effect”.

Did we miss any? Have another favorite? Don’t hesitate to leave a comment and let us know. Enjoy the rest of your October, and please, read some scary stories for us!