This weekend was a busy one in Annapolis, where the croquet teams of St. John’s and The Naval Academy squared off in the 37th annual Annapolis Croquet match.  St. John’s ended up winning 4-1, marking their 30th victory in the history of the match. Below is a description of the action by admissions counselor and former croquet player Robin Lancaster (A 18′):

After a stormy Friday, Navy Saturday dawned a typically gorgeous April morning and set the stage for a perfect day of croquet. Although the Johnnies (29-7) came into the day with a four year winning streak and the US Croquet Association’s Junior Rookie of the year Tom Balding (A 20’) on Court 5, the last three years’ victories came only by the slimmest of margins. It took a miraculous recovery and winning drive by Stephanie Hurn (A 17’) and Mack McGowan (A 19’) to secure victory in the decisive fifth game in 2016 and similar heroics were required to put the series away the following two years. 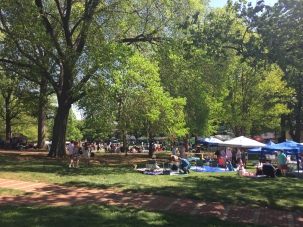 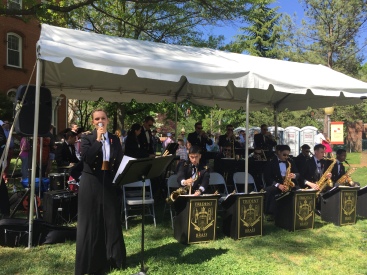 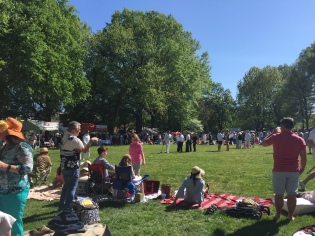 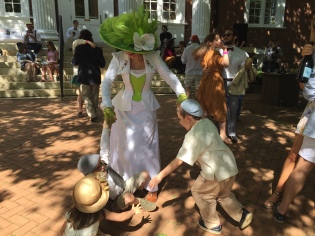 Format: The Annapolis cup is contested by the two teams on the front lawn of St. John’s College in a best of 5 games format. The games are played in two rounds on three courts; the first team to win three games is crowned champion but might have to wait until all the games have been played to lift the cup. This is exactly what happened this year as, for the first time in several years, the Johnnies took victory in all three of the first round games to secure a match victory before the day was even half over. If you want to know more about croquet terminology and strategy, check out the videos below where I will go through some of the basics of the game.

Game 1: Imperial Wickets Mack McGowan and Alex Muradian (A 19’) got off to a strong start but fell behind in the mid-game before finishing out on the back of a very strong 2-ball break from Muradian, running from 3 to rover in a single turn and setting up a typically clinical 3-ball run by McGowan to finish the game.

Game 2: Game 2 was the first of the games to finish with Sean Miller and Charlie Carpenter (A 20’) taking the victory after Miller lulled Navy into a false sense of security by overshooting 2 on the first turn—Carpenter set him up to pick up a 3-ball break which Sean played to perfection, running from 2-out all the way to rover on the 2nd turn. With such a commanding lead, heroics were unnecessary but that didn’t stop Carpenter from picking his partner off the line with a beautiful 10 foot shot to take advantage of the 2 Navy balls left on-court. After building the 3 ball, he never looked back and swung the game decisively in the Johnnies’ favor.

Game 3: Game 3 was a slugfest, with the Mids and Johnnies trading blows (and liveness) from beginning to end. It all came to a head as the game neared its 3rd hour of play, when, with the wickets tied (1 ball rover, 1 on 1-in-to-the-stake), the Midshipmen missed a crucial shot, allowing the then rover Mitchell Harris (A 20’) to set up his partner Val Pehrson (A 19’) for the game (and match) winning run through the alley. The Johnnies could rest easy knowing the day was won before any of the second round games were played, but Croquet is a game of honor and respect so played they would be to the utmost of both teams’ ability.

Game 4: Game 4 was the last to end, the St. John’s team, Sam Cooper (A 20’) and Alex Kwilinski (A 20’) were very much in the lead from early on but the Mids battled hard and were able to overcome the deficit to earn their only victory on the day and (narrowly) avoid the clean sweep.

Game 5: Although the St. John’s team got off to a rough start, falling several wickets behind, the two players, Jared Bassmann (A 20’) and Tom Balding, both experienced veterans of past Annapolis Cups and National Croquet championships, were able to collect themselves and play patiently from behind. Eventually, Balding found an opening and was able to run a devastating 2 ball break that ate away the Navy’s lead and set his partner up for the eventual win.

The day finished with a resounding 4 victories for the Johnnies, and a loss that only was such by the slimmest of margins. St. John’s (30-7), already national 6-wicket collegiate champions, hoisted the Annapolis cup for the 5th year in a row to resounding cheers. It was almost too much excitement for this poor croquet alum to handle—until next year.

Robin breaks down the history of the match:

Robin breaks down the equipment used to play croquet:

Robin explains the rules of the game: