This is no ordinary fall at St. John’s. Earlier in September, the college made a big announcement: we lowered tuition from $52,734 to just $35,000.

Why did we do it? Principally because $52,734 is too much for most families. In the past, St. John’s gave generous merit and need-based scholarships to lower that cost. But did you know that 60% of Americans aren’t aware that colleges offer scholarships? They see a $52,734 price tag and say: “I won’t apply because I can’t afford this.” Now many more families know they can afford St. John’s. And we still give generous merit scholarships and need-based financial aid.

How could we afford to do this? Principally because we have some extraordinarily generous and successful alumni. The college has embarked on a $300 million capital campaign that started with not one, but two, $50 million gifts. Those two gifts, among the largest to any college in the country, come from alumni who are leaders in their fields.

It costs $59,203 to educate one Johnnie. We don’t have a lazy river or 50,000-person stadium at St. John’s, but we do have small classes under 20, one or two faculty in every classroom, and we don’t rely on adjunct professors. As a result, St. John’s has a pricey academic model, but now every Johnnie is getting a $24,203 gift from our alumni that lowers tuition to $35,000.

This is a big deal. Such a big deal, in fact, that Frank Bruni wrote a column in The New York Times all about St. John’s. 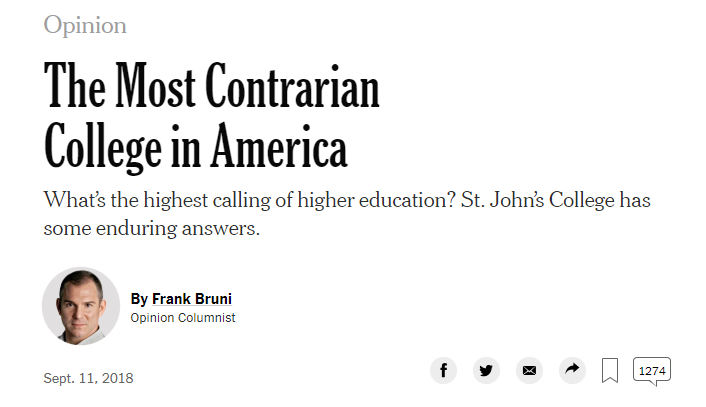 And then the news spread far and wide. We’ve been in Inside Higher Ed, the Associated Press, the Albuquerque Journal, the Capital Gazette, Business Wire, NBC News, and more.

If you want to learn more about the new tuition and financial aid, read the articles above and then check out sjc.edu/financial-aid.